The Capital Region Wind Ensemble (CRWE) was founded in 1994 with the intent of providing a vehicle for professional wind and percussion players to perform concert band and wind ensemble literature at a high level. The CRWE is dedicated to serving the community by providing outstanding performances of classical and contemporary band literature and by serving as role models for young student musicians.

Once a year, the CRWE invites selected high school students to perform with the ensemble and participate in master classes with guest soloists.

Many CRWE members teach or have taught in school districts throughout the Capital Region. Members also perform professionally with regional ensembles including the Albany, Schenectady, and Glens Falls Symphony Orchestras. CRWE members are often heard at Saratoga Performing Arts Center, Proctor’s Theatre and other local theaters; and with groups from the area pop and jazz scene, including the Empire Jazz Orchestra. 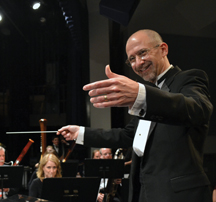 He performs and records with the Empire Jazz Orchestra, and the Dogs of Desire. He is an active composer and arranger and a member of ASCAP and SCI. Mr. Wery received his M.A. from the University of Denver and his Bachelor of Music degree from the North Carolina School of the Arts.