So you are moving to Schenectady, what is it going to be like? The area that is now Schenectady was originally the land of the Mohawk tribe of the Iroquois Nation. When Dutch settlers arrived in the Hudson Valley in the middle of the 17th century, the Mohawk called the settlement at Fort Orange "Schau-naugh-ta-da", meaning "over the pine plains." Eventually, this word entered the lexicon of the Dutch settlers, but the meaning was reversed, and the name referred to the bend in the Mohawk River where the city lies today. (United States of America. City of Schenectady. City of Schenectady; Schenectady History. N.p., n.d. Web. 12 Sept. 2014.) http://www.cityofschenectady.com/148/City-History

Schenectady is located 18 miles from Albany, New York, the home of New York State Government. Approximately 160 miles north of New York City, 185 miles from Boston and 375 miles from Washington D.C. Schenectady sits on the rail and bus route, so train and bus travel to other parts of the U.S. are easily accessible to students. The Albany International Airport is located only 20 minutes from the College campus. 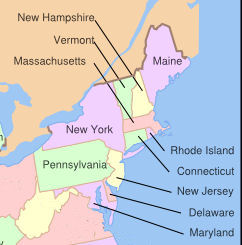 The Schenectady area experiences all four seasons. As a result, the weather varies from season to season. Temperature ranges from 60° to 85° Fahrenheit (18° to 29° Celsius) in the summer to 0° to 38° Fahrenheit (-17° to 30° Celsius) in the winter. The Northeast U.S.A. area can receive a large amount of snow in late fall throughout winter, which can begin in late October and last until late March. During the rest of the year, rain showers can occur unexpectedly, and the humidity level can be uncomfortably high in the summer. Weather conditions are more moderate during the spring and fall.