Barbara Smith is an activist, educator, and author who has played a groundbreaking role in opening up a national cultural and political dialogue about the intersections of race, class, sexuality, and gender.

At SUNY Schenectady, Allyship is about building solidarity and using one's power and privilege to highlight the systems of oppression around us and begin the process of dismantling the structures that maintain them. Join us during the week of October 10th for activities that will help you better understand Allyship, amplify the voices of those in marginalized communities, and support an inclusive community here at SUNY Schenectady. 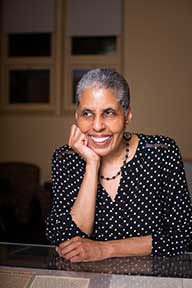 Barbara Smith is an author, activist, and independent scholar who has played a groundbreaking role in opening up a national cultural and political dialogue about the intersections of race, class, sexuality, and gender. She was among the first to define an African American women’s literary tradition and to build Black women’s studies and Black feminism in the United States. She has been politically active in many movements for social justice since the 1960s.

She has edited three major collections about Black women: Conditions: Five, The Black Women’s Issue (with Lorraine Bethel, 1979); All the Women Are White, All the Blacks Are Men, But Some of Us Are Brave: Black Women’s Studies (with Gloria T. Hull and Patricia Bell Scott, 1982); and Home Girls: A Black Feminist Anthology, 1983.  She is also the co-author with Elly Bulkin and Minnie Bruce Pratt of Yours in Struggle: Three Feminist Perspectives on Anti-Semitism and Racism, 1984. She is the general editor of The Reader’s Companion to U. S. Women’s History with Wilma Mankiller, Gwendolyn Mink, Marysa Navarro, and Gloria Steinem, 1998. A collection of her essays, The Truth That Never Hurts: Writings on Race, Gender, and Freedom was published by Rutgers University Press in 1998. Ain’t Gonna Let Nobody Turn Me Around: Forty Years of Movement Building with Barbara Smith, edited by Alethia Jones and Virginia Eubanks with Barbara Smith was published by SUNY Press in November, 2014.

She was co-founder and publisher until 1995 of Kitchen Table: Women of Color Press, the first U. S. publisher for women of color. She resides in Albany, New York and served two terms as a member of the Albany Common Council from 2006 to 2013. From 2014 to 2017 she served as the Special Community Projects Coordinator for the City of Albany helping to implement the Equity Agenda.

2015 – Doctor of Letters, Honorary degree awarded by the University at Albany